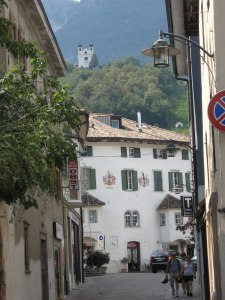 All right, so we left Frankfurt and heard a loud bang in the train station, thought it might be a bomb or something…..nope, one of the inbound trains ran into the barrier and it caused a ruckus in the station. After that wake up call we were on our way to Bolzano, Italy. In Italy we got settled in and as we said yesterday immediately made some new friends, French Canadians (Jacque would be proud)! We met them while hiking through the woods to Lago de Carezza (google it, absolutely beautiful)….we felt like we were stalking them the whole time, come to find out they got lost so we joined forces and finally found the lake. They ended up being the nicest people from Quebec, after the hike we shared a bottle of wine and talked for about 7 hours back at the hotel. We did not bring up healthcare (Patty) and we gingerlz skipped right over a sidebar discussion on politics. Next day we decided to take a gondola ride right up into the Dolomites where we spent the entire day hiking. The pictures are breathtaking, we will share later if we can. Cierra was a serious trooper, that baby is going to be one tough cookie if it is anything like it’s momma! We hiked what felt like on top of the world for the entirety of the day and then like the day before shared a bottle of wine, few beers, cheese and crackers with our Canadian friends, Paulyene and Marcielle. The next morning they invited us on another adventure, they had a car…so we drove in and out, up and down, through the Dolomites all along SR48 in Italy (google it, amazing)! With a turn around in Cortina, we finally made our way back to the hotel. This entire time we were in search of the Internet and phone which we could not find, our phone card doesn’t work very well and we are seriously in the sticks, or boonies as Paulyene calls it. Yesterday, we were up early…on a train to Innsbruck, Austria and into Germany. So this is where it gets interesting. We stopped in a little town called Mittenwald. Sitting on the train for about 20 minutes we were wondering why the train had stopped. We were in search of Garmisch, per Grandma and Aunt Terrie’s suggestions. Finally we realized the train would not be moving anymore…they were doing railwork so we were forced to get off the train and take a bus to Garmish. Needless to say Garmish did not have that same small town charm that we were looking for like Mittenwald and Krun (another little town we rode through). So after a short stop in Garmish, lunch at Burger King, yes Burger King, our first American meal since arriving, we headed back to Mittenwald. After a very nice dinner in the cutest little tavern shared indoors with a German and Italian couple we headed off to bed. And now here we are this morning, at the pc again, Cierra checking her work email and Michael doing his school homework. We will be leaving here, checking out Mittenwald a little bit more, and then will be off to conquer Innsbruck, where we will eventually find our way back to Bolzano (don’t worry Aunt Terrie, we plan on skipping the Iceman, maybe) and then finally on back to the boonies of Carezza. We are running out of time on the pc here and the keys are all backwards so we’re going to cut it short. We will post-call when we can but it might not be for a few more days! We miss you all, including Roxy, boys please take care of our baby!