The Little Town of Maria Alm, Austria
We awoke on our second day in Maria Alm with the anticipation of the kickoff to the towns fall festival called “Bauernherbstfest”. Well, I will have to speak for myself and say that it was really my anticipation of this fall fest. Mike would be on a train to Vienna today if he had his way. According to the “Bauernherbstfest” booklet (which gives you a day by day event calendar running from Sept. 6th-the end of the month) – today was the kickoff. The pictures in the booklet made it look as if there was a huge parade with people dressed in their classic early 19th century Alpine gear, cows with cow bells and wreaths of flowers around their necks along with goats, sheep, etc. parading through the town. Did I mention a band? Okay, well, I was totally prepared for this big parade through this small town. Around 1:30pm Mike and I headed towards the city center and found that there were no crowds forming for this parade. A little confused we went back to our hotel and asked where this fest was. Apparently, this big parade is in the middle of the month. Today, the kickoff begins at this farmer’s farm a few miles away. She asked if we wanted her to call a cab and Mike gave me the look. The “are you serious” look. I told her “sure”! and within minutes our taxi arrived. The taxi took us to this hill and from the hill we had to take this tractor pulled train up to the top of another hill with the farmhouse. Clearly we were the ONLY Americans here. There were long tables outside to sit at, a few places to buy beer, desserts, or bratwursts and bread, and in front of the farmers house was a band. Feeling a bit out of place we quickly grabbed a table and Mike, a mug of beer. Eventually a few other people joined us at our table. They did not speak English. Anyways, long story short, a few beers and “prosts” later we managed to communicate quite well. (Disclosure-I drank water: no beer was consumed) I got to use some of the German I have been learning thanks to the Rosetta Stone and Mike, with beer sign language and guy talk (gestures) was able to have a conversation with the people at our table. The couple we met were the Martins and they were absolutely fun to talk to! They called the Schnapps Madchen (the girls who had a mini keg purse of schnapps that they would pour shots from for money) over for a photo opp for me and we talked about anything from how to say cow in German (pronounced “koo” ) to the Beetles and Elvis. Anyhow, we had a great time, the weather was beautiful, the music was nice, and the company was wonderful! The Martins even dropped us off back at our hotel and gave us big hugs and kisses on the cheeks-which was good since we had NO idea how to get back. It’s not like the taxis were lining up at this farm house! All in all, Mike had a good time ( 4 beers later! ) and I got my picture of a cow. It turned out to be a great day after all. 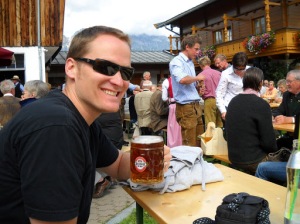