A view from one of the side canals. We purchased a few oil on canvas paintings this year, we have one almost identical to this pic, very beautiful. 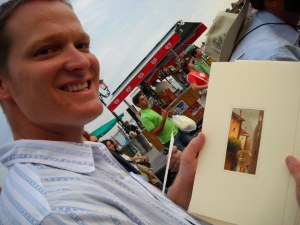 Wheeling and dealing on the streets of Venice.

The Rialto, right to the left of the pic is where I popped the question almost 4 years ago…

Our favorite restaurant in the entire world, Trattoria Sempione. We sat three windows to the left. The view….awesome.

At dinner in Trattoria Sempione. Check out the gondolier in the backgrond! Not only did we have dinner in our favorite spot, but we also had the same exact table and waiter from the previous year. He remembered us and so did the owner, a sixth generation restaurant that is tucked away on a side canal. Right outside the window singing gondoliers pass by throughout the evening. Dinner was amazing! Cierra had her Peppered Fillet (same from last year and a meal she has been talking about ever since). We had a bottle of vino (Note: Cierra only had a half of glass), the owner bought us a round of Limoncello (I had both of course…again) and we eventually said our goodbyes and made our way back to the hotel for the evening. We have now been engaged, married, and with a little bambino(a) in the city. The owner made us promise to come back once we had the little one in tow!