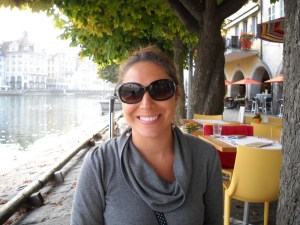 All right, so once again the famous covered bridge (apparently the most photographed thing in Switzerland) and octagonal tower/torture chamber to be followed by…..

the chocolate candy that slightly resembles, well…we’ll leave it up to your imagination b/c if you are thinking what we were when we saw this then chances are you probably would have snapped a few pics as well. Tom/Mark we were going to bring a few home for you guys, but we were scared of being searched at the airport and having to explain exactly what these were!

Cierra and I are obsessed with Swiss Tolberone candy, last year we found one bigger than our backpacks, this year this arm sized chocolate bar was the best we could do. Notice in the background…..they were everywhere! 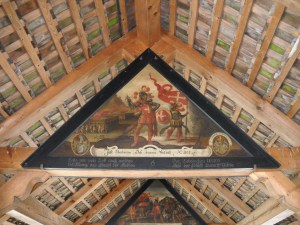 A beautiful painting on the historic bridge that managed to withstand the catastrophic fire of the late 1990’s (the paintings date back to the 16th century…we think, you might want to fact check those).
O.K. so Switzerland in summary, we came, we saw, we ate chocolate and fondue, we conquered!