This day started off pretty boring enough, but ended pretty exciting. We were up and at’em from Lienz, Austria. We found a cute little hotel at the last minute, called Dolomitenhotel the night before. Somehow we ended up with a corner room, a bed for everyone, 2 balconies and an all you can eat breakfast for the four of us, for less than $100 at the last minute. I just walked in, asked, it was available and boom, there you go, place booked. Good thing too, because the day ended with a drive through 4 countries, some serious altitude adjustments and 2 little tired kinder.

We set out to explore the Lienz Castle early in the morning and then headed east back to Villach to return the rental car. Our plan worked perfectly in that I dropped Cierra off with the kids at the train station, returned the car to Europcar about 1.5 miles away and then huffed it back. We caught the afternoon train from Villach and coasted in to Vienna…yeah…about that coasting.

Cierra always gets on me about how I make all this stuff seems so easy, in my mind it is, but in her’s there seem to be details left out or ‘things’ I missed or that I ‘see’ differently. This below is the perfect example of this discussion we are always having. I simply call it “Channeling Jason Bourne”! (watch the movie series if you haven’t – top notch effort by Matt Damon and crew).

So… going into Vienna, much like the last 5 days mind you, we didn’t have a pre-booked room. Remember, this was the flexible portion of the trip. We made it to Slovenia and Croatia just fine without a booking, why should we need one for Vienna, right? Luckily, the OBB Austrian Railjet train had wifi…well sort of. It worked for about the first hour of the train ride and Cierra was editing photos (that it seemed we would never be able to put on the blog in that WE HAVEN’T HAD LEGIT WIFI SINCE LEAVING FRANCE!), while the kids watched a movie and I was doing work. She reminded me that we should find a place to stay since wifi was free on the train. Yeah, we’ll get to it in a bit, we have plenty of time, it was about a 4 hour train ride.

Well, that plan didn’t work, because about 1.5 hours in, the wifi stopped working. It was spotty at worse and dial-up slow at best. Cierra began to worry a little in that we were going to be arriving around dinner time late in Vienna and it had been a long few days. She was amazed as I sat there calmly on my laptop, doing work and said, don’t worry , it will all work out. Spoiler….well it did and it was amazing!!!!!

About 20 minutes out of Vienna, the OBB wifi kicked back on again and we were up and running. We both were on our phones and I quickly via my Orbitz/app account secured a sweet hotel right near a metro. She took the kids to the restroom and on her return started worrying about logistics, is the walk too far, do we take a taxi, is that going to be too much, is the hotel even nice, in a nice part of town – this is only a few of the 100 questions she was asking??!?!? Me – We’re not taking a cab, too expensive…Don’t worry honey, I got this!…as she rolls her eyes. We coasted into the train station, walked directly to the U6 Metro, bought two one-way tickets, hopped two stops, changed over to the U4, went two more stops, popped out back topside at our hotel less than a block away from Hetizing Metro Station in a very ritzy part of Vienna right near Shonbrunn Palace and were chilling in our hotel room with our feet up less than 20 minutes from pulling into Vienna Miedling Train Station.

She looked at me said, how did you do that? I said, while you were in the bathroom with the kids on the train, I

She calls it “Luck”, well I call it “Channeling Jason Bourne”…it’s all about a sense of direction. You did all that in less than 5 minutes, she said. Yep, I answered!

We ended the evening at a fantastic place recommended by the hotel manager, that catered to locals and had an Oktoberfest themed biergarten and a menu that read only in German…my kind of place.

Unfortunately no time for Vienna for now, we are on to Prague. But we will back within the week! 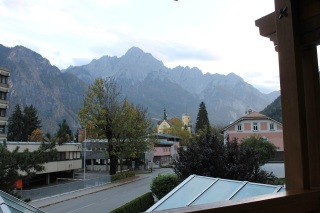 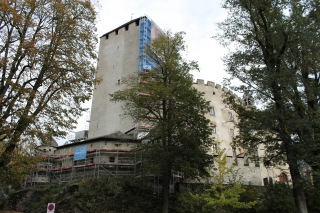 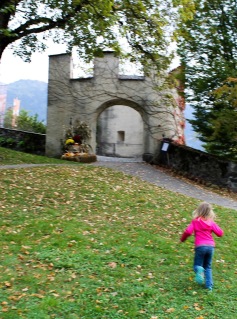 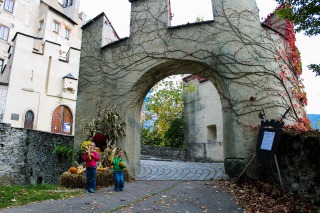