We are not the best travel journalists and have MAJOR gaps in between our travels but we are going to TRY and make a conscious effort to do better.  We started this years ago to keep our families in the loop ( when international phone rates were crazy expensive ) and more importantly, for our family.  We wanted to have something we could look back at with our children through the years.

And so, Aloha!  This was a super last minute ( even for us ) family trip.  We had a conference for our company in Oahu and originally Mike was going to fly solo.  The cold, damp, gray winter has been wearing on all of us so when he floated the idea of all of us going over the the island for a little sunshine it didn’t take us long to make a decision. We had to clear it with the school first, gather a weeks worth of school work, and packed the kids with them not knowing what our plans were.  A total surprise! Thanks to Delta Sky Miles we were able to make this happen and before you knew it we were off.

Several movies on a ten hour flight from Atlanta with stir crazy kids, we arrived around 4:30pm island time.  We were walking zombies at this point and just wanted to get to our Airbnb, eat, and crash.  We found a great Airbnb thanks to my cousin who was stationed in Oahu for a few years.  He recommended Kailua to us as that is where he used to live.  We wanted a low key, easy going beachy area and apparently this was the place!  We wanted to avoid the hustle and bustle of Waikiki like the plague, and so we did. Anyways, we checked into our Airbnb which so happens to be home to a well known local artist. She was out of town so we got to stay in her beautiful home.  We also found out that we were now caretakers of a koi pond ( the koi had to be fed daily ) and two of her cats, Macy Gray and Liona.  Thankfully they hang outside more than inside and have a cat door but they like to be fed first thing in the morning so these duties have been outsourced to the kids.  The best part about the house is that it has a pool and is in walking distance to a quaint shopping district and the beach.  We checked in, dropped our bags, asked for recommendations for a local take out spot for an easy and quick dinner and off we went.  If you are in the Kailua area I highly recommend Mahaloha Burger.  Its super cute and reasonable and they didn’t mind us zombie walking up to them at 8pm with our kids.  The food is all locally sourced and they had beer at this cute burger joint.  A total win/win. https://mahalohaburger.com/ 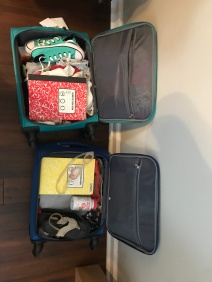 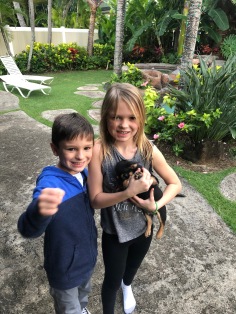 JET LAG SUCKS! It does. We are used to flying in the opposite direction and sleeping overnight but going west is SO much harder with jet lag.  We were all up by 4am so seeing the sunrise was a nice bonus! Trying to keep the kids quiet until the rest of the world woke up was a challenge but we managed.  We didn’t have groceries so we took more of my cousins advice and went to his favorite breakfast spot, Moke’s Bread and Breakfast. https://mokeshawaii.com/.  Once again, a home run.  We hit up the local Food Land grocery store, went back to the house and headed for the beach as fast as we could.  We found parking thankfully at the nearby Kailua Beach Park.  We were there around 10:45 and headed over to the riverlet from the Ka elepulu Pond that goes out to the sea.  This way the kids could splash around in the shallow water with the boogie boards OR play in the waves. They had options and we didn’t have to move because we beached ourselves in between the two, in perfect yelling distance haha!  We literally just packed 4 beach towels, sunscreen, and two apples.  I feel like we are the best at being beach going minimalists. Maybe…..a bit too extreme. Next time we will bring water.  We weren’t far from a small market anyways but we were good to go for the next few hours. This place was totally family friendly with small waves and lots of fun dogs to pet ( they were leashed ).  Mike and I baked ourselves, taking in every bit of vitamin D that we could get.  The kids boogie boarded and took turns pushing the other down a big sand dune into the river runoff as if they were snow sledding.  We were there for about 3 hours and slowly made our way back sun dazed to the house for lunch.  The kids played in the pool and we had the chance to meet all of our neighbors.  The woman who owns the main home where we are staying in built her house with 3 other studio apartments attached to rent out ( genius! ).  We met sisters from Alberta, Canada next to us, a couple from Switzerland who are in the front unit, and a couple from BC, Canada on the other side of us.  We all sat in the sun and had a few beers together while the kids played in the pool.  It was only 5 and the jet lag started to kick in.  This mom was going down and so were the kids. Mike seems immune to jet lag which is totally not fair.  We grilled out before we passed out with hopes of more energy in the morning. 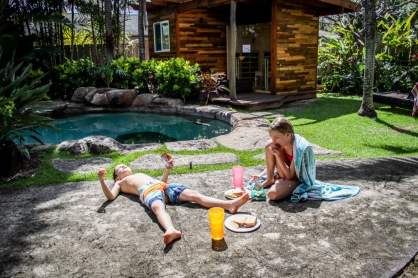